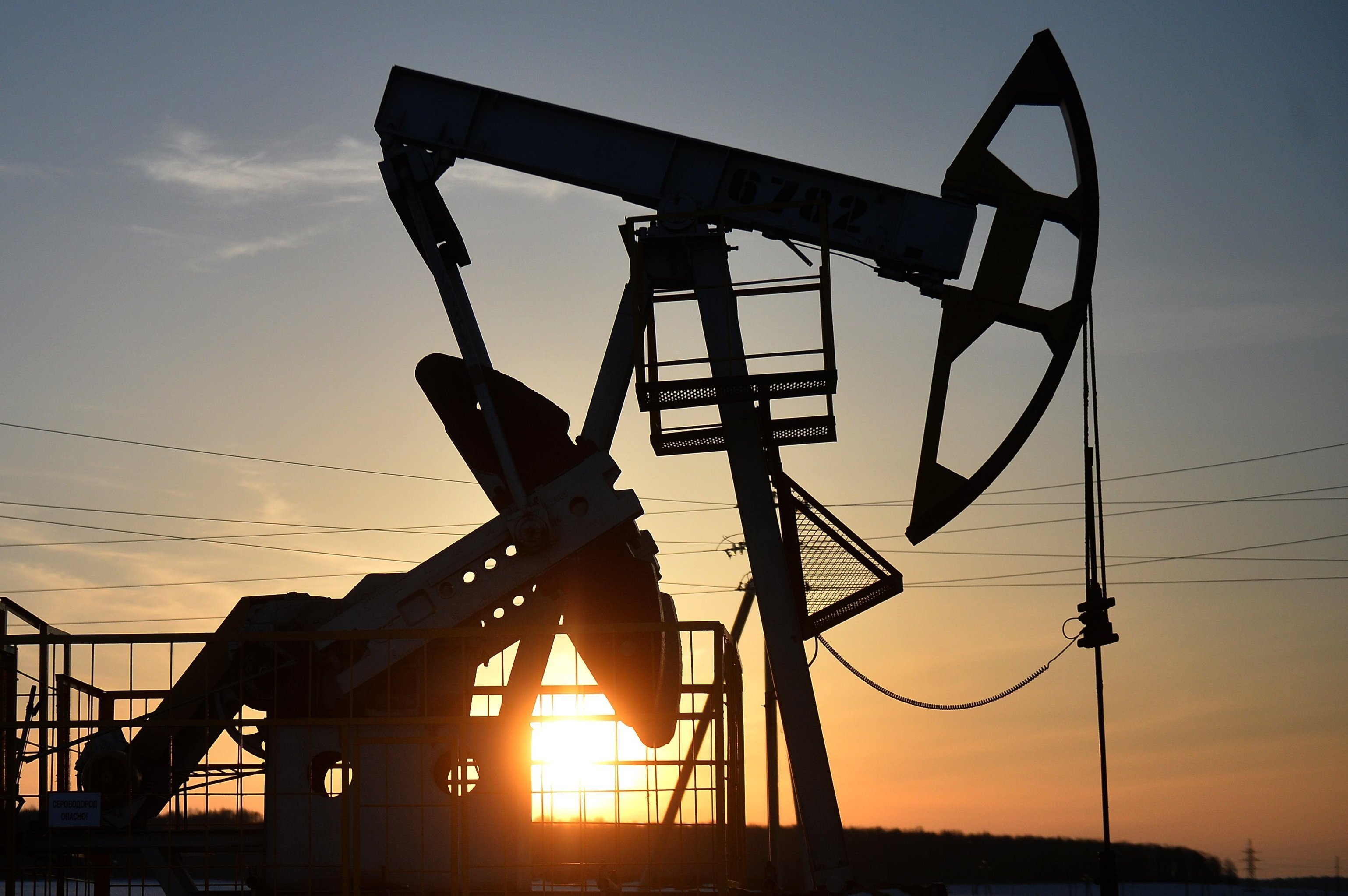 Dynamic load emulation of sucker rod pump in laboratory test bench can provide a convenient platform for conducting experiment for testing diagnostic models and verification of operational methods. This paper presents a strategy to implement a test bench for emulating the dynamic load of sucker rod pump. The emulation strategy is based on load torque estimation considering the principal concepts of electromechanical test bench. The dynamics to be emulated is determined by a real time simulator that runs the model of the sucker rod pumping unit. Test bench consisting of induction motor as driving machine and separately excited DC motor as load machine is described and the simulation results show satisfactory tracking performance.

A typical design cycle begins with simplified software simulations (like MATLAB, PSCAD) to validate basic conceptions, then proceeds through increasingly deepened representation of circuit details and control functions [1]. Further, a thorough testing of the actual system is imperative in order to promote from experimental phase to production phase. However, there are some systems, which are difficult to test with the help of real equipment; instead, test benches are used to reproduce parts of the system. For example, in [2] wind turbine emulator based on separately excited dc motor have been implemented to accurately reproduce the characteristics of real wind turbine.

The aim of test benches development can be to create research environment for analysis and investigation or/and establish procedures for assessment and verification of various systems.

In electromechanical systems, test bench consists of two mechanically coupled machines: driving machine and load machine. In order to, emulate practical load characteristics, the technique that controls the machine acting as a load is required to control the load torque under any circumstance. The torque developed by the machine acting as a load can be predetermined if the dynamic performance of the application is not critical (open loop system), otherwise, it is obtained from measurement of the speed or position of the driving machine (closed loop system). In [4-5] the inverse mechanical dynamic principle was used to imitate satisfactorily practical load characteristics.  This principle allowed the machine acting as load to follow the desired trajectories by using the measured shaft speed as an input. The inverse mechanical dynamic principle is effective in applications employing continuous time systems. However, for discrete time implementation the stability is easily affected if the effects of sampling are considered. Stability analysis in [6] has shown the effect of sampling time on stability and indicated that its emulation applicability is limited to an inertia less than twice the total inertia of the test bench. Digital filters might be adequate to stabilize the system, but the emulation gives incorrect results because the overall pole-zero structure of the closed loop system will be different from the pole-zero structure of the desired mechanical load. Therefore, the stability and acceptability of time response of the test bench are not enough to produce a torque speed characteristic as close as possible to the desired torque speed characteristic. In [6-7], control strategies, which use feed forward and compensator that is independent of emulation model have been implemented. This approach preserves pole-zero structure of the desired dynamics and is applicable for both linear and nonlinear loads dynamics. The authors in [8-9] have avoided the using inverse transfer functions and compensator terms by using torque estimates. This is help full to simplify the method and reduce the noise problems due to measurements. The approaches presented in [3,10] used the disturbance-observer-based emulation scheme in order to consider the effect of disturbances or plant uncertainties and the experimental results show the robustness of the method.

The power requirement and profitability of sucker rod pumps are basically determined by the torque load on the pumping unit’s gearbox [11]. Therefore, proper analysis of the gearbox torque is crucial in order to achieve the desired economic benefits. The gearbox torque calculation involves calculation of kinematic parameters of the four-bar leakage mechanism. It is not practical to construct the real sucker rod pump as a laboratory facility to create research environment. But mimicking the dynamic behavior of sucker rod pump by controlling the torque on the load machine is convenient approach.

Fig. 1. Structural scheme of a laboratory bench and a real drive

Generally, the actual torque exerted by the load machine on the shaft of the driving machine can be described by:

Suppose the desired electromechanical drive system shown in Fig.1 has inertia Jem and friction Bem. Then, the dynamic equation can be written as:

Where: ωem and ML are the desired angular speed and load torque of the desired mechanical load to emulate.

The objective is to control Me so that the dynamic response described by (1) and (3) are as close as possible. When the desired electromechanical system and test bench have the same dynamic responses, the following conditions will be satisfied.

From (1), the inertia and static load characteristic seen by the driving machine is not equal to the characteristic of the load machine. Interestingly, the developed torque of the load machine can be adjusted such that when it is summed with its own inertial and frictional torques, the driving machine sees the desired load torque speed characteristics. Under this condition (4) can be satisfied. This forms the basic idea for emulating mechanical loads by test bench.

A third order system describes the nonlinear model of a DC motor as given by: 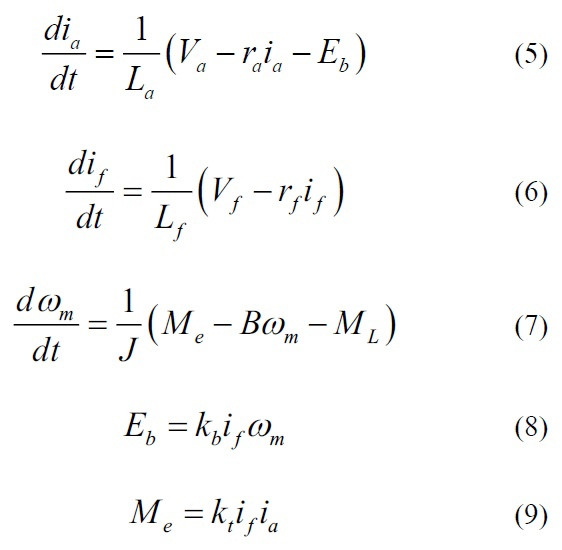 Principally, parameter uncertainties and flux saturation affect the design of control system. However, in this work, the variation of the parameters is assumed to be negligible and saturation effects are not considered. Moreover, there are other electrical characteristics (such as brush resistance, mutual inductances and eddy current loses) and mechanical characteristics (such as windage, stiction and stray loses), that are considered to improve modeling but can be neglected in control design [13]. The bilinear terms also complicate the control design. However, using measurements of field current, armature current and angular speed, bilinear behavior can be removed. In order to design controller for armature current, lets define a new variable va' given by:

The measured angular speed and field current can be used to determine va. Then, the linear transfer function of the reduced model can be expressed as:

A PI controller may be designed to produce the desired torque trajectory. In this paper, the flux is maintained constant. At the output of PI regulator, a filter is installed to suppress noise. The transfer function of the filter is usually represented as

Where Tμ is uncompensated time constant. 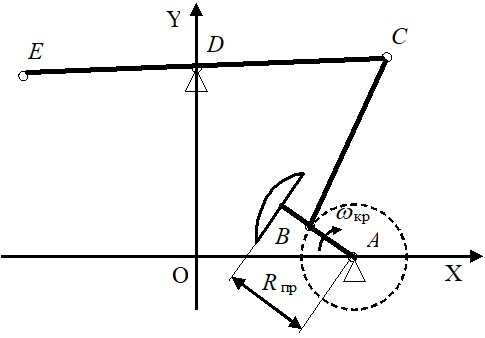 Since the crank is continuously driven by the prime mover through the gearbox, the crank angle φcr, which is the angle between crank arm and the horizontal, varies with time. Therefore, the angular speed of the crank can be described by:

At any instant, knowledge of the kinematic parameters (displacement, velocity, acceleration) of the pumping unit elements is important to calculate the torque requirement. Assuming the four-bar linkage mechanism is absolutely ridged, then analysis of gearbox torque could be studied as a function of the crank angle. In mechanics generally, the moments for ridged body system about an arbitrary point is expressed by [14]:

Moments of inertia are also given on the bases of the general expression from mechanics [14].

Where: n and k are the number of masses with rotational and translational motion respectively; Ji is inertia of the ith link and mi is mass of the jth link.

Where: ωi is angular speed of the ith mass about its own axis and vj is the linear velocity of the center mass of the jth link.

Since, the position and angular speed of individual links are functions of the crank angle, then the net torque acting on the gearbox and the total inertia of the different components depend on the crank angle. Therefore, the general equation that describes the dynamics of sucker od pumps will be:

Where: Mcr is the torque applied to the crank from the gearbox side. Equation (17) shows that the dynamic response of the sucker rod pump is highly depends on the crank angle.

The problem of dynamic analysis of sucker rod pump requires the computation of ui and ρj. To solve the problem, lets fix the origin of the coordinate system at O, which is formed by the intersection of the vertical line passing through the saddle and the horizontal line, which passes through a point about which the crank shaft rotates.

Consider the following designation for the four-bar linkage mechanism: crank arm AB=r, pitman BC=k, rear walking beam CD=l1, front walking beam DE=l2. The horizontal distance from origin to the point about which the crank rotates OA=mx and the vertical distance from the origin to the saddle is denoted by ny. Based on the considered machine arrangement the crank is assumed to rotate clockwise. Then, at any instant the position of the points A, B, C, D, E can be described by the following coordinate points: 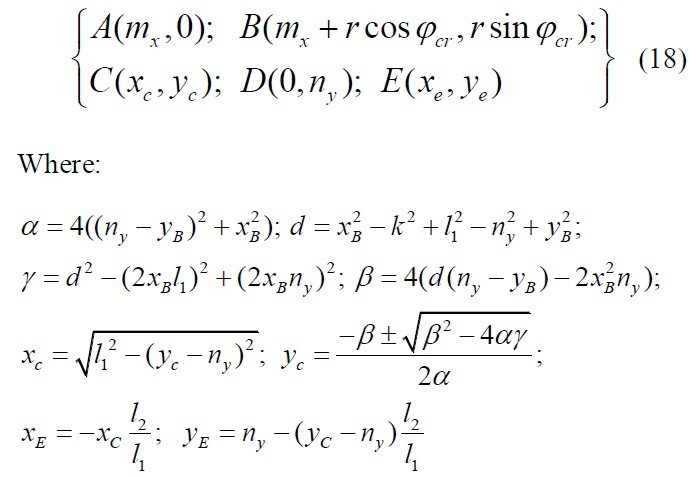 Consider the following mass matrix m=[m1, m2, m3, m4] represent masses attached and possessed by each link of the four bar linkage mechanism. m1 denotes for the mass of counter weight which is located at a distance r1 from the center of crank axis and offset by an angle φpr from the crank, m2 represents the mass of pitman, m3 denotes the equivalent mass of the structural unbalance, m4 is the total mass connected to the polished including the mass of balancer head. Then, considering the position of the end points of each link, the matrix coordinate of center of mass of the links is given by: 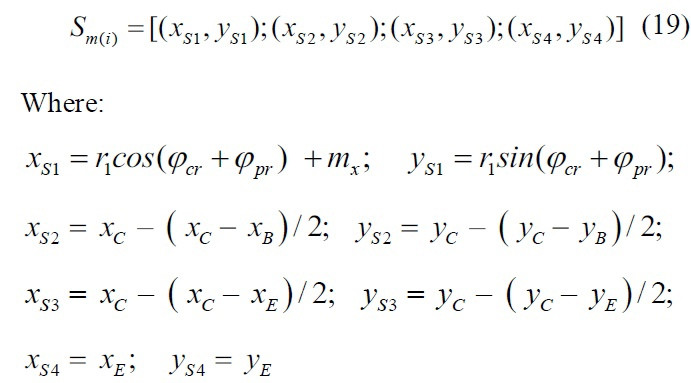 If the crank arm is displaced by Dφcr in a time interval Dt, then using the coordinates of center of masses the change in angular displacement, the position vector, and velocity of the ith mass can be expressed as:

Therefore, the angular velocity of the center of mass of the ith link can be determined by:

Equation (24) is used to determine ui. 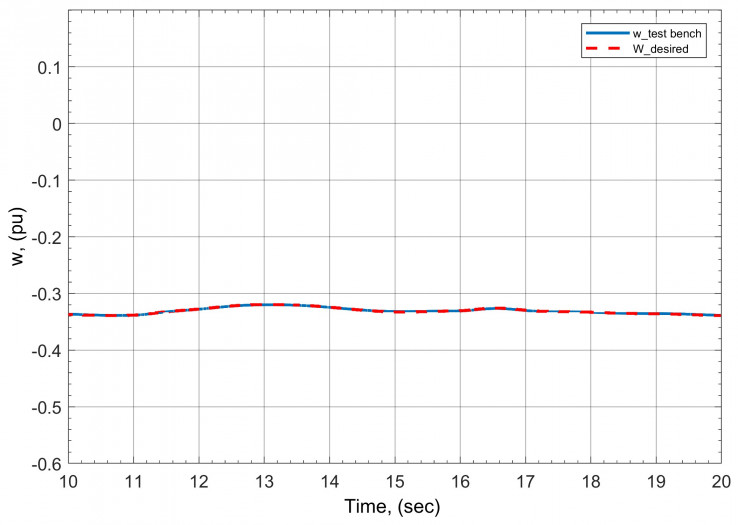 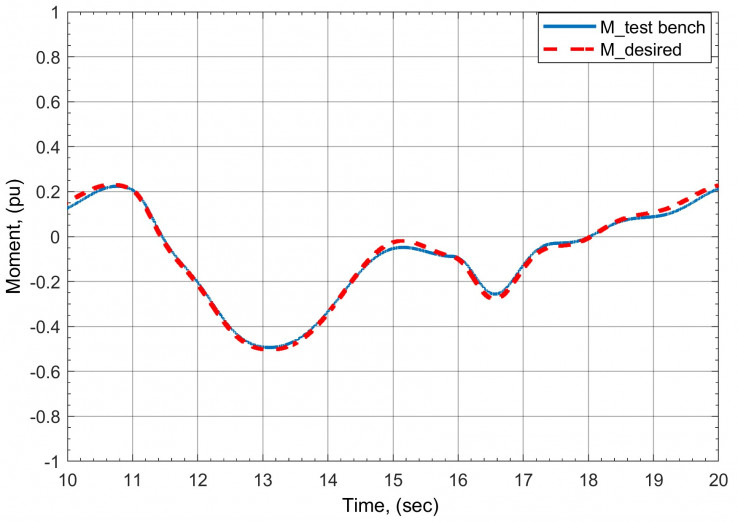 Offsite testing of sucker rod pump can be implemented in laboratory test bench system as shown in Fig.3. The crank angle is determined from the measured speed. Then, the net torque on the gearbox, which is reference torque to produce the desired torque speed characteristics, is determined from real time model that mimics the sucker rod pump behavior. The actual torque on the shaft of driving machine can be measured using torque transducer or can be estimated from the measurements of electromechanical torque of either machine and plant parameters (inertia and viscous damping). However, when the parameters of the driving machine are not available, a torque transducer can be used to measure the shaft torque.

The control strategy is implemented in MATLAB Simulink. The test bench system consists of an induction motor as a driving machine and a separately excited DC motor as a load machine. In order to track the desired torque trajectory, the armature current of the DC motor is controlled using PI controller while maintaining flux constant. The PI controller minimizes the error between the actual load torque and the command reference torque to follow the desired torque trajectory. The PI controller introduces some delay, which is small compared to mechanical time constant. Thus, the stability of the system is not affected. Fig.4 and 5 show the emulation performance of speed and torque tracking in comparison with the simulation of desired real mechanism trajectories. The results of the emulation follow the desired speed and torque trajectories. This implies that the dynamic load of sucker rod pump is successfully emulated.