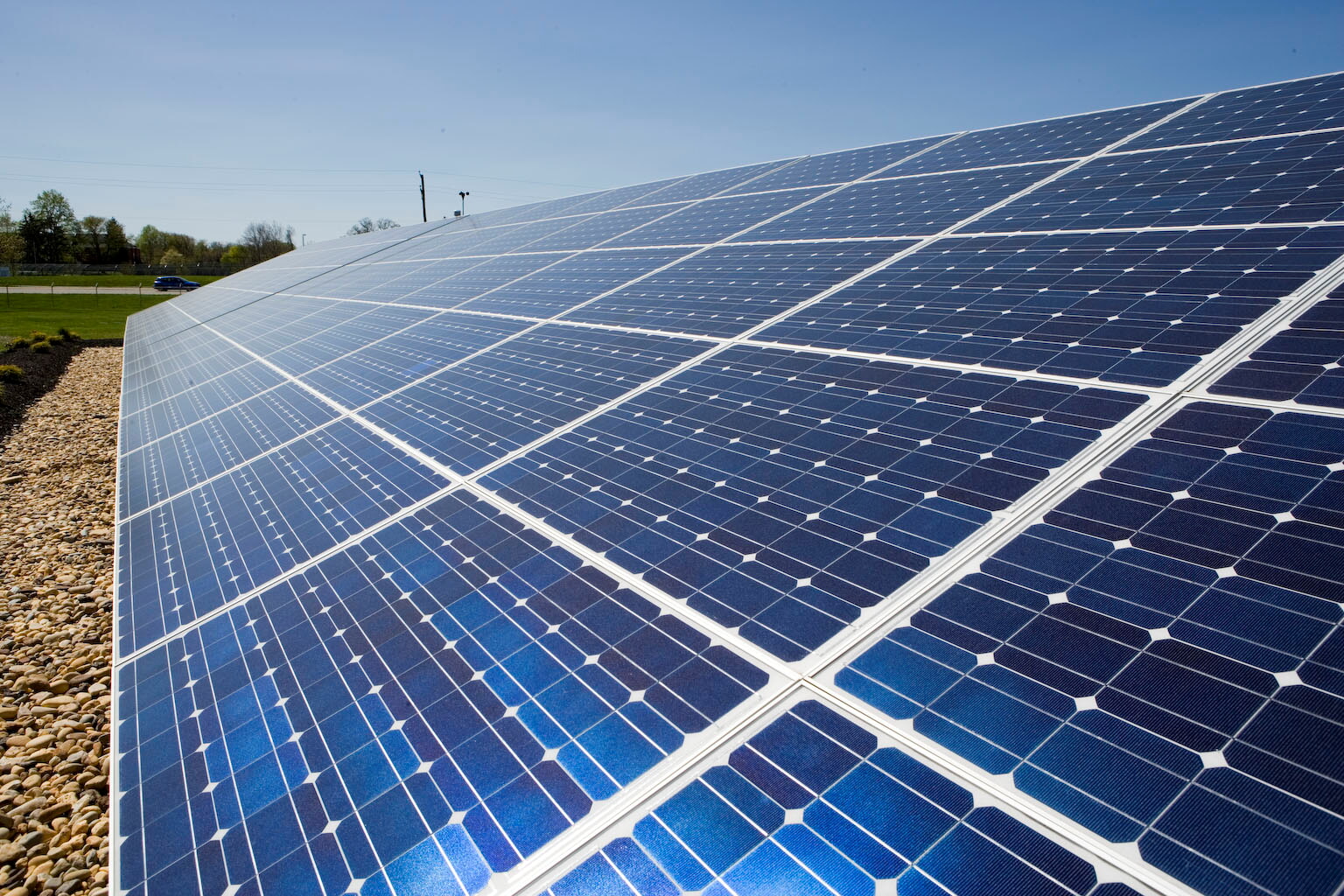 The use of renewable energy sources is becoming more popular due to the growing consumption of fossil fuels, which leads to environmental degradation. The advantage of renewable energy sources is their independence from limited energy sources and their low impact on nature. The modern system of photovoltaic power generation transforms one of the most used natural sources of energy – solar energy. Continuous improvement of these systems reduces their cost, increases efficiency and stability, along with reducing the harmful impact on the environment. In many systems with photovoltaic cells (PV), the main task is to track the maximum power point (MPPT), since the mismatch between the load characteristics and the maximum power point (MPP) of the photovoltaic cell, which depends on the light conditions and cell temperature.

To date, numerous MPPT techniques are reported in [1]–[3]. The most common MPPT topology is the power feedback method, which measures the output power of a PV array and uses it as a feedback variable. The three most commonly used MPPT methods are the Perturb and Observation method (P&O) [4, 5], the incremental conductance method (IC) [6], and the hill climbing method (HC).

Among the customary MPPT, P&O is the best and appears amazing joining. In any case, the tracking has two major disadvantages. The first is the nonstop wavering that happens around the MPP. And the second is the P&O is slanted to lose its following course when the irradiance (G) increments quickly. Both issues contribute to the MPP tracking failure and consequently decreased following efficiency

The aim of the article is to present the modification of conventional P&O that will neglect stated issues which mostly common to low-power PV systems [1-3]. The dynamically changing conditions of irradiance leads to the waste of energy in such systems, due to MPP oscillations and low convergence speed. The proposed solution will maintain the power at maximum point with little oscillations. It will increase the overall efficiency of low-power PV systems.

The most common case is using DC-voltage converters with pulse-width control or DC-voltage inverters [7] as an interface between arrays and the load[8]. The duty cycle of the converters is another feedback variable in this type of topology. Thus, there is another method of MPPT related to the power of the solar battery and the duty cycle.

This article offers an improved tactics for finding the maximum power point, using a boost converter as an interface between the PV and the load. The control strategy will be based on HC, with the modification of a new method for changing the duty cycle. Changing the duty cycle reduces fluctuations around the MPP and leads to faster tracking ability. The duty cycle automatically changes in the direction of the working point. If the operating point is far away, the step size of the duty cycle increases, achieving the faster speed of finding local MPP.

II. COMPARATIVE ANALYSIS OF METHODS FOR TRACKING THE MPP WITH SELF-ADJUSTMENT.

The method is based on the ratio of the power and the duty cycle of the control signal. Mathematically, the local maximum power point can be found if dP/dD is equal to 0 by the control system (fig.1). This type of control is called hill climbing (HC) [6]. 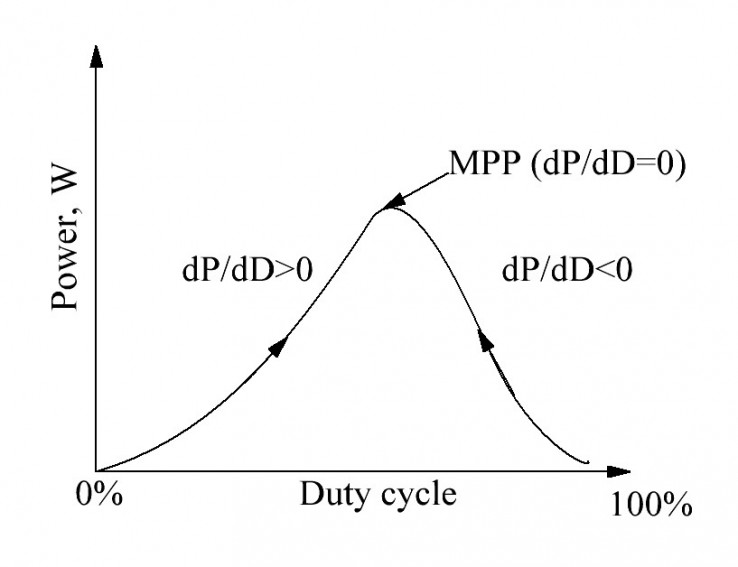 Describing the HC algorithm, it is necessary to say a few words about its principles of work. The main target of the algorithm is to control two parameters.

The first one is “Slope’ that represents the direction of hill climbing in order to achieve the MPP on P-D curve (fig.1). It can be either “1” or “-1”

The second one is “a’’ that shows the increment step of duty cycle which lies from 0 to 1. 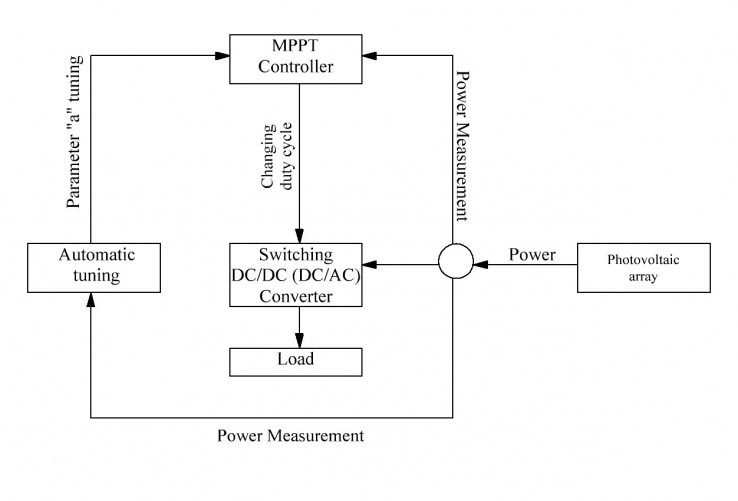 While periodically measuring the power level, these 2 parameters must be compared to result in moving operating point towards maximum power point.

There are a few disadvantages of poor response of the usual HC to rapidly changing weather conditions and the constant “a” parameter, showing slow reaction to static and dynamic changes. In the [6] the modification was introduced to automatically change “a” following that equation and figure 2:

The adjustment of MPP is made by “a” and “M” from equation (1), enabling controller to adapt in different situations.

The overall efficiency of this algorithm has been proved to have better steady-state performance than the usual hill climbing.

B.    Modified perturb and observation.

The benchmark of the standard P&O using EN50530 dynamic MPPT efficiency test in [10] has shown that the dynamic change of weather conditions leads to large oscillations if the perturbation step size is large and vice versa. The second problem is that usual P&O is tend to lose its tracking direction. This occurs due to fast and continuous increase of G (or the ramp change of G). It’s worth noting that such phenomenon is present only with ascending irradiance. When descending, the tracking direction is kept normally.

In [10] authors have made an analysis of both of these questions, addressing to the research of other studies. The first approach is to use voltage as an adaptation parameter. That means the size of the voltage perturbation is reduced as the operating voltage gets closer to MPP.

The main target of the analysis in [10] was to show that there is a gap in the divergegence issue. Brief describe of that issue is insufficient response to slowly changing weather conditions which leads to MPP tracking failure.

The proposed solution is to keep track of number of perturbation cycles until the working point reach MPP. Then the MPP oscillatons takes place. To prevent this, the inteliggent check takes place. That means that the perturbation size after check should be reduced to minimum value.

The second problem stated is the MPP direction loss. It is resolved with control measuremennts of power and temperature, which is then compared to limit value in program.

To maintain a strategic distance from the dissimilarity off the MPP, authors present a constraint for plausible location of MPP. In this way, the voltage will be constrained to stay in bounds and not get veered from the set MPP region. In any case, when the alter of irradiance at last stops the algorithm will establish at the MPP. A short time later near the MPP, it will distinguish the wavering and decrease the perturbation size to lowest rate.

According to the [9] and [10] and the analysis of numerous MPPT techniques, there is one more problem of changing duty cycle that hasn’t been clarified. To prevent oscillations of MPP and to keep the efficiency of the strategy, the adaptive duty cycle is proposed.

Proposing a method with a variable value of the duty cycle increment, in which the increment value will change depending on the number of transitions of the module's working point through the maximum power point. Figure 3. shows the volt-watt characteristic of the PV module, which shows the trajectory of the working point Xn where n - is the number of step taken when the irradiation change occurs. 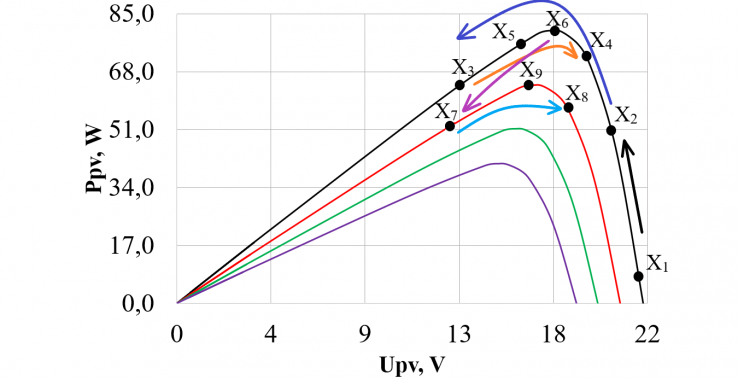 Fig.3. The trajectory of the working point of PV during MPPT

Consider the boost converter as the power interface between PV module and the load. The critical characteristic in the MPP tracking is the transient response of the output power of the PV module. Which can be obtained by analyzing the step response of the duty cycle to PV module voltage transfer function.

To find this transfer function, we use a system of equations describing the processes in the converter.

The system of equations (2) is a mathematical model of the converter that can be used to evaluate both static and dynamic characteristics of it when operating in the continuous current mode of the inductor.

Using the system of equations (2), you can get a controller model for evaluating dynamic operating modes

For the system of equations (3), it is possible to create an equivalent electrical circuit describing the linearized model of the converter

Fig.4 - Linearized model of the power part of the Boost converter 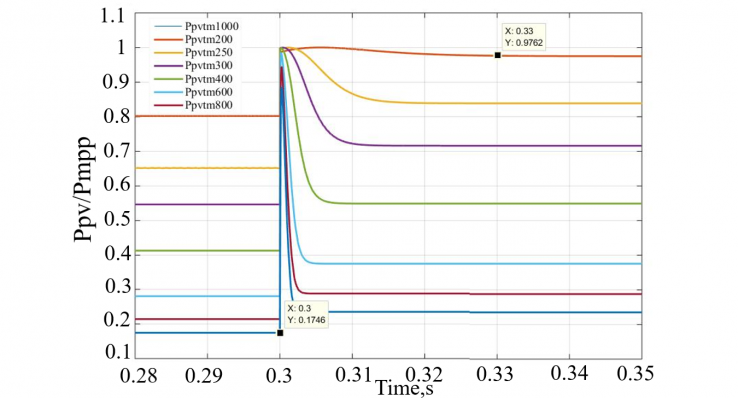 Fig. 5 - Power at the output of the PV module, for different illumination values

Using the diagram shown in Fig. 4 we will perform a computer analysis of the converter model and determine the main parameters (sampling period and increment amplitude) for designing a system for tracking the maximum power point.

To determine the sampling period when measuring the current and voltage of the PV, we determine the duration of the transient response for the step change in the duty cycle of the converter control.

As seen in Fig.5 duration of transient response depends on the intensity of solar radiation. Moreover, its maximum value will be at the minimum illumination of the PV module. Therefore, the sampling period for measuring the parameters of the PV module must be greater than 30 ms.

Since switching harmonics will be present in the PV voltage, the minimum value of the increment of the duty cycle of the DC control pulses must be determined in accordance with the condition:

Let us analyze RMPP-W curve of the PV module's model to select the maximum and minimum value of the duty cycle perturbation (fig. 6). 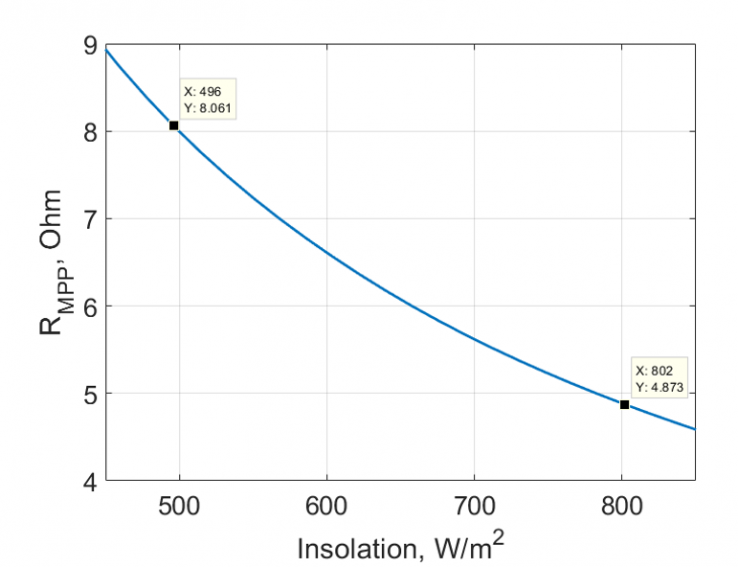 Where dMPP - duty cycle at the MPP, which could be found from

Since the converter's inductor current has triangle waveform, the magnitude of the switching harmonics of the inductor's current could be approximately evaluated as

Hence, we can calculate the magnitude of the PV module's voltage switching ripples

Where Cf – capacitance of the filter capacitor which inserted in the input of the dc-dc converter.

The simulation was carried out using the following models: 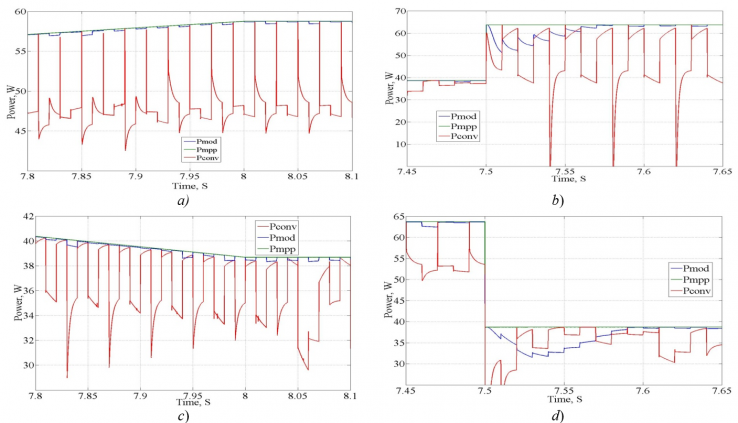 The simulation results of the boost converter with the proposed control system are presented in Fig. 7.

As it can be seen in Fig.7 a) and b), a stepwise change and ramp in PV module illumination from 500 W/m2 to 800 W/m2 are presenred. The standard algorithm of P&O is showing poor efficiency in dynamically changing conditions. The proposed algorithm is closer to MPP, and has better transient characteristics.

As it can be seen in Fig.7 c) and d), a stepwise change and ramp in PV module illumination from 800 W/m2 to 500 W/m2 are presenred. The standard algorithm of P&O is again showing poor efficiency in dynamically changing conditions. The proposed algorithm is closer to MPP, and has better transient characteristics.

The instant change of irradiance on Fig. 7 b) and d) was made to prove the tracking capability of the algorithm.

Simulation results for the energy transferred to the load are shown in Table I. 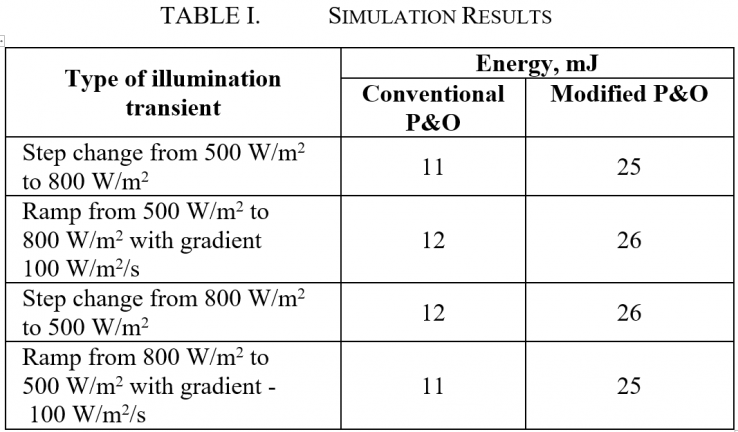 The overall efficiency of the proposed algorithm is greater then than the one of the conventional algorithm. This shows that the usual algorithm disadvantages will have impact on the PV source as well as on power grid, due to it’s more nonlinear power form. The proposed algorithm shows faster tracking ability, it has no tracking failure of MPP and greater response time in dynamically changing illumination conditions.