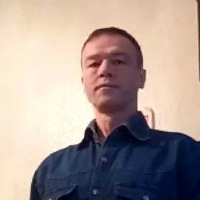 The author of the article has developed an original method of Computer Modeling of High Detail (CMHD), which allows solving the problems of modeling dynamic systems and mechanisms of any complexity. Using this method, working dynamic models of mechanisms are constructed that are involved in controlling the behavior of an autonomous robot, as well as circuitry solutions that allow answering questions of self-study. In addition, CMHD allows to solve tasks on creation of mechanisms of pattern recognition, decision making, training and many others.

The new modeling and control method relates to breakthrough technologies, which implements a parallel computing algorithm for each program cycle, which can significantly increase the efficiency of modeling processes and, through the use of a universal dynamic element (inkan), to monitor the processes under study in real time.

Attention!  The text is translated from Russian into English by an unprofessional translator.

Area of interest: Modeling of complex dynamic systems, development of mechanisms of self-instruction.

Despite the prevalence and the obvious advantages of the differential equations, their shortcomings in the simulation of complex dynamic systems are:

- the complexity of control and management of the system and with an increase in the number of differential equations,

The developed method of computer modeling of high detail (CMHD) can be used to study complex mechanisms in biology and other natural sciences.  The method is based on the use of a universal dynamic element (inkan), with the help of which it is possible to create high-quality models of mechanisms of almost any complexity, as well as to reveal causal relationships of the processes under study.  The simulation is performed according to the original method with a unique technology that does not use the conversion of differential equations.

The purpose and objective of the development of a Universal Dynamic Element (UDE) is to eliminate the shortcomings associated with the imperfection of known modeling methods, create a universal element that allows implementing dynamic systems and mechanisms of almost unlimited complexity on its basis, as well as increase the efficiency of computer modeling due to:

- increase the speed of calculations,

- the continuity of the investigated process in time,

- the ability to interfere with the experiment,

- the ability to unlimitedly increase the complexity of modeling dynamic mechanisms,

- refusal to use «heavy» modules, which require complex management and programming,

- improving performance, which is achieved due to the refusal to recalculate differential equations,

- the ability to create new types of devices using only UDE (inkan) .

This problem is solved due to the fact that the universal dynamic element (UDE) can be performed both programmatically and using microprocessor devices.

The universality of the inkan lies in the fact that on the basis of one UDE it is possible to build different modeling tools: a comparator, amplifier, matching circuits, counter, trigger, multivibrator and others.

One of the remarkable properties of modeling on UDE is the ability to implement parallel conversion of all inkans on a single processor (per program cycle), which ensures synchronized operation of all elements in real time.

In addition, the use of inkans ensures one hundred percent compatibility of any nodes and mechanisms with each other and at any stage of development.  Using inkans there is no need to use individual function generators.  Sine functions, exponents can be obtained on inkan.  UDE replaces all types of simple dynamic links, such as: buffer, amplifying, inertial, integrating, differentiating, delay link, etc.

The need to create a low-level modeling language has existed since the creation of computer technology, since this method opens up unlimited prospects in the study of all natural phenomena, and also makes it possible to change views on the principles of operation of neurons and the entire nervous system.

To start modeling dynamic systems (and the nervous system is also dynamic system) it is necessary to study the properties and features of the inkan. Inkan is the brick from which you can build a model of any complex mechanism.

Graphically, the inkan is depicted as a rectangle to which the upper shoulder and lower shoulder are attached. On the shoulders of the inkan will be given control signals.

The output signal is determined by the level of Virtual Fluid (VF), which is contained in the inkan.

In contrast to the mathematical integrator, which integrates the energy of the input information signal, Inkan - integrates a Virtual Fluid (VF), the arrival rate of which is controlled by the input signal.  The mass of the Virtual Fluid M(t) will be determined by its accumulation in the inkan, which remains from the difference in the inflow and drain currents:

This is not surprising, but on this principle it is possible to build an algorithm for the operation of a software universal dynamic element (inkan). 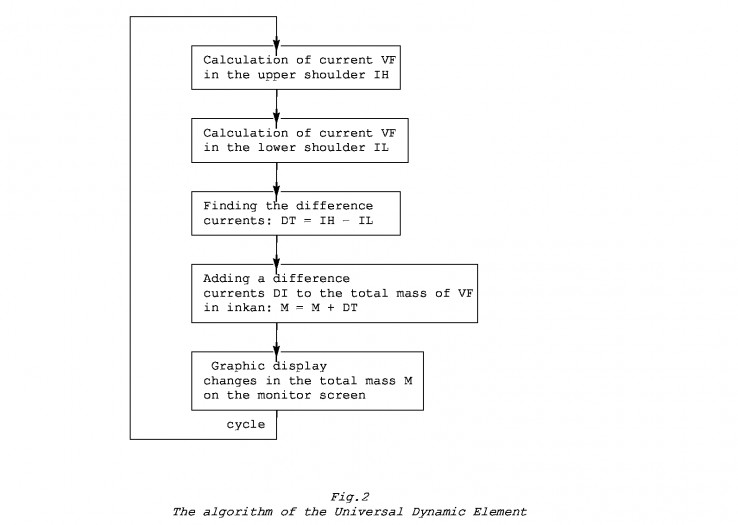 Any arbitrarily complex system can be modeled using a limited (countable) number of basic schemes, such as:

and some other schemes (auxiliary) that are not used very often in practice, for example, matching schemes.

The main properties of inkan:

In inkan, the influx and runoff of virtual fluid can be carried out independently of each other. Those. source damper control is independent of the drain damper control. At first glance, it may seem that this is a trivial thesis, but in fact this principle allows you to expand the capabilities of the classical integrator.

By changing the degree of influence of the control functions on the conductivity of the upper shoulder or lower shoulder, you can change the speed of filling the integrator with Virtual Fluid, which allows you to control the inertia of the inkan.

By increasing or decreasing the conductivity of the lower arm in the inkan, it is possible either to «slow down» or «activate» an already ongoing process in a dynamic system.

The use of inkan as a Universal Dynamic Element (UDE) allows to increase the speed, which is achieved due to the refusal to recalculate differential equations. This property eliminates the use of high-speed computers for modeling complex dynamic systems.

In addition, the use of inkan allows you to increase the accuracy of the solution, which helps in fine-tuning complex and very complex circuits.

On the basis of only one UDE it is possible to build different types of devices, due to changes in its properties, for example:

The use of inkan allows you to use only simple functions. All complex functions can either be bypassed or formed from simple ones, such as: linear, step,  single impulse.

If we connect the input signal buffer with the comparator, we get a circuit very similar to the work of a biological neuron, which illustrates the rule «All or nothing»:

It should be noted that the disadvantage of the «classical» model of an artificial neuron is that it does not take into account the time delays that affect the dynamics of the system (inertia).  Input signals immediately form an output signal.  This drawback is deprived of the scheme built on inkan and depicted in Fig.3.  If the signal P(1) receives a signal below the Critical Level of Depolarization (CLD), then the signal Q is not generated at the output of the comparator, and if P(1) exceeds the CLD, then an «action potential» is formed at the output.

The inertia of an inkan is determined by the time it takes for the buffer to reach two-thirds of the input signal level.  The inertia is measured in seconds or clock cycle.

The characteristic properties of the CMHD in inkan:

- Inkan differs from the classical integrator used in circuitry in that it can hold its charge or level for an arbitrarily long time.

- All simulated processes occur in real time.  Time is continuous.

- Additivity - the ability to add input signals for each shoulder.

- There is no dependence on the dimension of the investigated processes.

- The possibility of unlimited buildup of elements in the studied model, without reducing the quality of the simulated process.  The use of inkans allows an unlimited increase in elementary modules.

- The ability to intervene in the process under study and manage it in real time.

- Tracking the process under investigation in real time.

Modeling of complex dynamic mechanisms begins with the development and construction of a graphic scheme, the main element of which is inkan.  The number of inkans in each scheme can be any: from one to hundreds of thousands, as far as the developer has the mind and imagination.

Characteristic properties of CMHD on inkan:

- Inkan differs from the classical integrator used in circuitry in that it can hold its charge or level for an arbitrarily long time.

- All simulated processes occur in real time. Time is continuous.

- Additivity - the ability to add input signals for each shoulder .

- There is no dependence on the dimension of the investigated processes.

- The possibility of unlimited buildup of elements in the studied model, without compromising the quality of the simulated process. The use of inkans allows an unlimited increase in elementary modules.

- The ability to intervene in the process under study and control it in real in the belt.

- Tracking the process under investigation in real time.

Modeling of complex dynamic mechanisms begins with the development and construction of a graphic scheme, the main element of which is inkan. The number of inkans in each scheme can be any: from one to hundreds of thousands, as far as the developer has the mind and imagination.

full verbal description of the work of the mechanism under study.

The result of this work is the construction of dynamic models with the identification of the most significant factors and patterns that allow us to predict the state of the system under the influence of various factors.

After drawing up a graphic diagram, its data are entered into a program that recounts the values ​​for each UDE and displays them on the monitor screen.  In the modeling process, you can permanently make changes to the scheme, change the number of UDEs, edit any parameters, etc.

The main advantage of CMHD is the ability to abstract any mechanism or element in the image of an inkan.  What does it mean?  For example, when assembling a dynamic mechanism, an engineer uses motors, potentiometers, dampers, filters, levers, and various other elements that the device can consist of.  So, when modeling in the CMHD, you can access any of these elements in the same way as you would a regular inkan.

The uniqueness of the method lies in the development of a new technology that has no analogues in the world of modeling practice. Today, all well-known packages of dynamic modeling use the principle of recalculation of algebraic-differential equations - a principle that has long been outdated and does not allow full use of the capabilities of computer modeling and control of complex mechanisms.

On the basis of a dynamic element, you can build any arbitrary objects whose properties the developer himself will set! CMHD does not require high-speed computers and can be used in the development of programs based on microprocessor technology, which allows you to create complex control mechanisms for mobile robots, autonomous agents, drones, etc.

The main areas of application of CMHD :

- Construction and algorithmization of computer models in medicine, biology,

- Non-linear processes and self-organization in biological systems (the role of homeostasis in adaptation),

- Development of methods for collecting and processing visual data in the tasks of analyzing the movement of objects,

- Algorithms and mechanisms for controlling robots and autonomous agents.

Also by using the method CMVD can decide the tasks associated with Autonomous learning robots, and stabilization of the rocket during landing, game programming, recognition of abnormal operation of engines and many others.

3. Kanareykin A. V. Evidence of GCMM No. 2018660306. The program that implements the method of computer modelling of dynamic systems and mechanisms on the inkan method (high detail method).